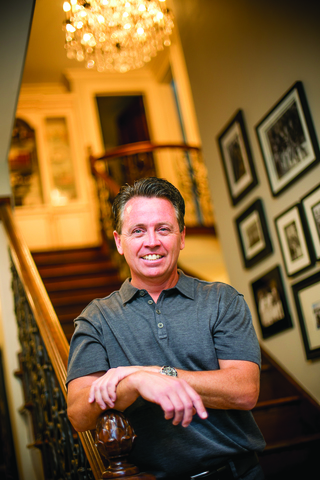 Sandra Riordan was astonished when she got the phone call from NBC.

If her husband, Jay Riordan, were to make it to the finale of American Dream Builders, would she be available to fly out to Los Angeles with her five sons to film the last episode?

She wasn’t supposed to tell anyone—not extended family, the school or her neighbors—that her husband, a Western Springs resident and founder of Riordan Signature Homes, was nearly a finalist in the national television show’s first season.

The Riordan family’s journey to Hollywood began when NBC invited Jay Riordan to interview at the Chicago Ritz-Carlton. He estimates that he was considered along with 4 to 5,000 builders from across the country. Riordan stood out as a talented builder and designer for his five Crystal Key Award-winning homes since 2009, voted by the Home Builders Association of Greater Chicago as the best homes in the Chicagoland area.

Sandra Riordan laughed when she recalled her husband’s decision to interview for the show.

“I knew he was always going to be on it,” she said. “He’s got the TV personality.”

When Hinsdale Magazine met Jay Riordan, he led us on a tour of his home, which he built himself. Just inside, the bright interior folds around a forking staircase and exposed stone archway. In Riordan’s office, pictures of his houses hang along one side of the dark wood paneling, and his sons’ artwork is displayed on the opposite wall. The Riordans’ home is designed with traditional aesthetic and comfort in mind for the family of seven.

“It doesn’t matter if it’s a Nantucket design, if it’s a contemporary design, or if it’s a French design—you have to be passionate about all those different architectural designs, and execute them with some historical accuracy and a timeless elegance, and listen to your clients—listen to how they want to live,” he said.

Riordan described the relationship between builder and client as a “marriage,” and said that communication and understanding in the relationship is critical to a successful build or renovation. 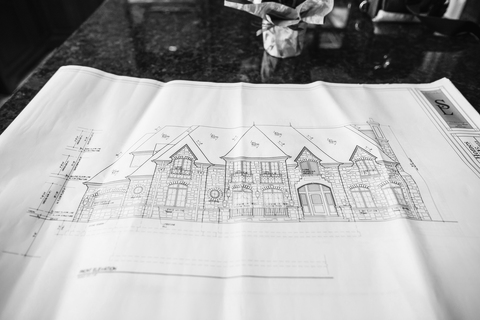 Once he was accepted as one of 12 contestants on American Dream Builders, Riordan flew to California to begin filming.

“I was a little naïve when I first went out to Hollywood,” he said. “I thought, ‘Okay, I’ll bring my golf clubs...we’ll do a little bit of TV work; it’ll be a piece of cake.’”

Instead, Riordan woke up at 4 a.m. to video chat with his family during breakfast. Then, he was on set by five, shooting by seven and back at his hotel as late as 10 p.m. six days per week. He filmed for a total of nearly 4½ months.

Riordan said the most difficult part for him was being separated from his family.

“It’s almost a little bit sad, to be honest with you, to be away from your family for that length of time,” he said.

He attributed his family’s stamina during that time to his wife.

“They call me ‘the general’ on the show, because I’m kind of bossy, or whatever,” he said, grinning. “But she’s the real five-star general, the real boss. She’s not a complainer.”

Week after week, Riordan called his wife to tell her that he still wasn’t coming home. 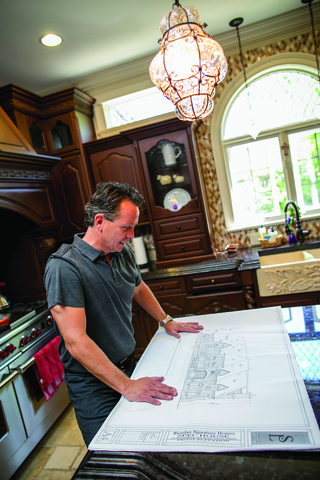 The final competition between Riordan and his co-finalist, Chicagoan Lukas Machnik, was a family beach house renovation. Riordan kept to a traditional design, aiming to create a livable, family-oriented space. But it was Machnik’s minimalist renovation that triumphed in the end.

Riordan said he does not believe that his design was necessarily better than Machnik’s, but thinks that he deserved the “American Dream Builder” title for working directly toward the needs of his assigned family.

“I really, in my heart of hearts, believe I should have won that show,” he said.

Little did Riordan know that his five children were on their way to deliver a surprise more heartwarming than any title.

Following the phone call, NBC offered to schedule a flight for Sandra Riordan and her boys on the following Wednesday morning—her triplets’ 13th birthdays. She told them that it wouldn’t work: if NBC wanted to keep the visit a surprise from her husband, then they would have to arrange a later flight to accommodate the family’s regular breakfast video chat. On the morning of their departure, Sandra Riordan told the boys to pack their school bags and to be sure not to mention the trip to their father.

“At that junction...I was really, really missing my family, more than I’d ever even imagined that I would have when I first started [the competition],” Jay Riordan said.

While lined up on the beach with Machnik for the filming of the finale, Riordan was surprised to see children running across the set.

“[I thought], ‘Oh, that’s going to be a problem; there are kids running across the beach,’ ” he said. “Well, they were my kids! How many adults, how many children from a family get to see what their dad actually gets to do for a living?

“[The boys] get to see what’s going on, get to see Hollywood and all of the cameras, and they’re getting mic’ed up, and they’re excited—that’s a once-in-a-lifetime thing for five little boys.

“It was very emotional...it was one of the coolest moments in my life personally.”

To have had the chance to celebrate his love of building with his family on American Dream Builders is a victory in itself that Riordan will never forget.