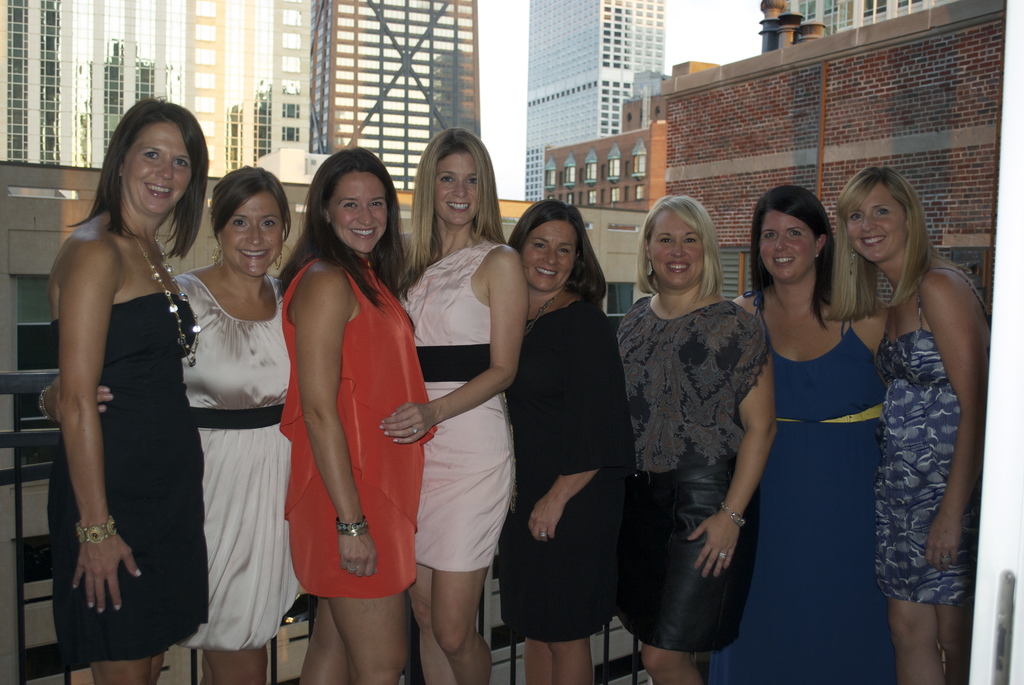 "Hence the satisfaction we enjoy in the society of one to whom we can communicate every circumstance in our situation, and can trust every secret of our heart."

-Dugald Stewart, Esq. (from The Active & Moral Powers of Man)

Similarities and commonalities often bring people together, but what is it that keeps them intact?  The Benet 8 is a group of eight ladies who grew up in the Western Suburbs and attended Benet Academy in Lisle. But instead of cursorily going their separate ways and reuniting serendipitously at a 10-year high-school reunion, these girls have remarkably remained in close contact, with six of them relocating to Greater Hinsdale from the city in recent years.

“Who your children are friends with is what influences so many of their behaviors,” Kathleen Jensen said, “and we were all very close and very competitive in a good way; we totally fueled each other to study harder, to get better grades, and I think that [helped to] get us all into good colleges and get us all employed after college.”

The nascent stages of the Benet 8 can be traced back all the way to 3-year-old preschool in Downers Grove, where Kathleen Jensen, now of Clarendon Hills, met Maria Shepard, now of Hinsdale.  In elementary school at St. Mary’s, Kathleen and Maria met up with Sara Schimmel in 1st Grade and Kristine Jeka in 3rdGrade.  Half a decade later, the group doubled in size at Benet, when Kathleen, Maria, Sara and Kristine encountered Dorothy Foster, a Hinsdale native, Susie Gura, who grew up in Clarendon Hills, Nicole Bell, an Oak Brook native, and Kathleen Devine, who passed her childhood in Glen Ellyn, during their first two years.  All of the girls were actively involved with various programs and athletics during high school, which they believe contributed to the growth of their relationship.

“We were all very involved in every aspect of Benet,” Susie said, “whether it was sports or student government or anything—we didn’t just sit back on the sidelines and watch it go by.I think we would all say we very much enjoyed high school; whereas some people would walk away and go, ‘I really didn’t like high school,’ I think half of us would go back tomorrow.”

“[Back when I was in high school], my mom said, ‘I’m really glad you found your group of girlfriends, because I think it’s made you want more and try harder,” Kristine said.

Now the girls assert that they did have other friends in high school as well, but this was the tightest group that has remained in contact.

“This is the best group of girlfriends that have stayed together since grade school and on,” Sara said.

The ladies agreed that Benet Academy also created a cohesive, familial environment conducive to student-bonding and lasting friendships.  Sara Schimmel and Kathleen Devine, whose older siblings attended Benet, met under the school rafters when they were just five.

“From the moment you get there, [Benet] instills that it’s a family,” Sara said.  “We had church in the gym once a month from freshman through senior year.  I had a teacher that I still talk to.  You run into people everywhere, and [you see a] face—‘I’m not sure of your name, but I’m pretty sure you went to Benet.’”

While the Benet 8 have known each other since high school, the actual epithet was not developed until two summers ago, when Kathleen Jensen relocated from the city to the Western Suburbs.

“When I met new people bringing my children to Zion [Lutheran Preschool], everyone other than Kathleen [Devine] and Dorothy were still in the city; so I referred to my friends as the Benet 8—and it’s just kind of stuck,” she said.

After living out separate college experiences, the ladies reunited in Chicago, where they each passed a number of years before beginning to migrate to Greater Hinsdale.  Kathleen Devine was the first to leave the city, moving to Clarendon Hills.

“It was time for [my husband and I] to get out of the city, so we bought my in-laws’ house,” she said.  “When you look at the towns in general—from the beauty of them, to the schools, to the friendly neighbors—, I just think it’s a great place to live.”

Kristine said, despite growing up Downers Grove, she was already acclimated with Greater Hinsdale when she and her husband elected to move to the suburbs soon after.

“When you go to Benet, you go to school with kids from all over DuPage County,” Kristine said.  “Many of us grew up in Downers Grove, but most of my friends—Susie, Dorothy, my high-school boyfriend—were from this area. Carpooling together back in high school helped us get to know these Clarendon Hills-Hinsdale areas better than the Wheaton-Naperville area.”

But more than any other factor, an already-existent family presence in the Western Suburbs impelled most of the ladies to go west.

“Our families are here: our brothers, our moms, our dads, our sisters—they’re still here,” Sara said.

“That was our biggest draw—my brother’s family, my mom,” Kristine said.  “Especially as our parents start to get older, you want to help take care of them [and] be nearby them.”

With six of eight group members currently residing in Greater Hinsdale, the Benet 8 is now thriving in and enjoying the family-friendly lifestyle of our suburbs.

“This is one of the warmest, most welcoming places I have ever been,” said Maria, who currently lives in Hinsdale.  “I cannot believe how friendly the people are here.  When we moved into this house, people from all around came to welcome us to the neighborhood.”

Dorothy Foster, who resides in Clarendon Hills, recounted a recent incident that reminded her of how much she enjoys being back in the ’burbs.

“Just recently something happened to my daughter, and I made a phone call and quickly figured out who was with her,” Foster said.  “I was able to talk to [the other child’s] mom, and I got a play-by-play of what exactly happened—and this is a mom that I don’t know from a hole in the wall—, but she and I had a half-hour conversation; and I got off of the phone and said, ‘This is why I love living here.’”

Just like back in high school, Maria said each girl in the group continues to have manifold social ties outside the group, but there seems to be something special about the 8 that keeps them inseparably bound together, while most other high-school friendship circles have been severed years ago.

“All of us have extensive girl networks,” she said.  “We all have a lot of different groups of friends, but we’ve always come back to this group.  There [are] no pretenses, no small talk—we don’t have to do any of that.”

All the girls agreed a litany of shared experiences have greatly enhanced the tie among them.

“We’ve been through so much—deaths and births and marriages and divorces,” Kathleen Devine said.

“Both of my parents died when I was younger, so it was kind of a debate for [my husband and me] as to where we were going to move;” Kathleen Jensen said, “and I wanted to come back here, because I knew these girls were going to be here;—this is my family.”